I have tried to start this post too many times to count. I have turned over different ideas and angles in my head. I have wondered if I should post it as a series of tweets or pitch it to a site with a larger audience. Ultimately, I knew my tribute to David Allen Wright needed to be here, where I grew up as a Mets fan and a writer.

My David Wright origin story begins at a Mets game at Shea Stadium in 2005. I was in the team store with my dad, sister, and brother looking for a Mike Piazza or Cliff Floyd t-shirt. Unfortunately (at the time) they were out of both so I would have to settle for another player. My dad suggested David Wright and even though I did not know anything about him I went with it and got my first ever Mets t-shirt.

My earliest memories of truly being a Mets fan are from 2005. Every time I watch David's barehanded catch I am transported back to my family room floor, sitting too close to the TV, watching it for the first time. I remember falling in love with the player on my shirt and telling people I used to think he was bald because even as an 11-year-old I did not want anybody to think I chose him as my favorite simply for being cute. 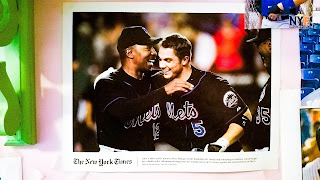 Around this time was also when I got my own bedroom for the first time in my life. I quickly outgrew the pink walls and butterfly wallpaper-border and knew I needed to make the room more me. So I plastered the walls with pictures of David Wright and some of my other favorite players. Those pictures are still on my walls and at this point the room would feel foreign without them. 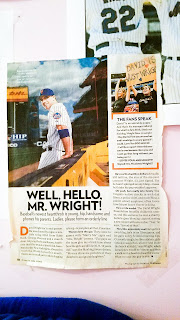 Throughout my teenage years David was simply everything to me. If I wanted a new Mets t-shirt or jersey it meant I wanted a new Wright shirt or jersey. I included a picture of him in my bat mitzvah montage. Even though I was never a third baseman I loved how we both had a habit of sticking out our tongues when concentrating. I unsuccessfully tried out his batting stance and got his A2K DW5 glove for my birthday even though it was too small to use for softball. When one of my camp counselors called me "David Wright" while fielding grounders I was on cloud nine for the rest of the day. I spent these years somewhere between wanting to be David Wright and wanting to marry David Wright, simply thinking about him all the time.

I have countless other David Wright memories - from knowing exactly where I was for the 2006 walk-off against the Yankees and the NL East clincher the same year to actually meeting him just a couple of weeks ago. David has been a part of the Mets for as long as I have been a fan and I honestly cannot imagine the team without him. I probably would not have fallen for baseball the way I did if not for David Wright.

The end of David Wright's career really feels like the closing of the final chapter of my childhood. It makes me want to reflect on other aspects of my life and wonder if my 11-year-old self would be proud of who I am now. It reminds me just how much baseball has shaped me as a person.

I still cannot believe I will no longer be able to watch the Mets and see the players I grew up with. This happens to every fan eventually, but I never wanted to think about David not playing baseball and admit my childhood might actually be coming to an end. But the reality is my first idol is moving on and I am now an adult.

Congratulations on an amazing career, David. Thank you for being my whole world for a while. 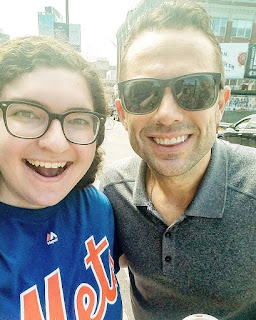